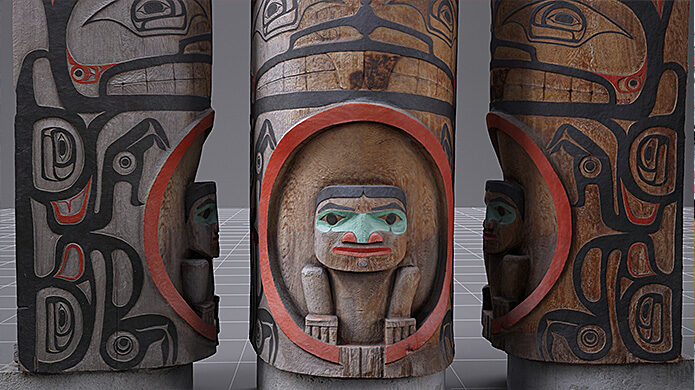 While many of our scans are captured in the controlled comfort of a well-lit studios, there are times where you need to capture something onsite. Such is the totem at the front entrance of Lu’ma Native Housing Society on Nanaimo in Vancouver BC. Incorporated in 1980, the Society was initially incorporated to provide affordable housing to Aboriginal families and individuals with low to moderate income, currently operating just under 500 units of affordable housing

Expertly crafted by Nisga’a artist Mike Dangeli, the totems were officially unveiled on October 25th 2013 and have weathered the elements rather well since then, as they often do. After getting permission, I found an ideal cloudy day and in the middle of the day, with traffic zooming by at one of east Vancouver’s busiest intersections, I captured the left totem in about 15min (Both totems are nearly identical)

The 114 source images needed some processing even before getting into the compiler, at which point the background of each image had to be masked out to avoid unnecessary data points. The first compile level generated nearly 71 million points in the dense point cloud, which in turn created a 2,887,088 polygon mesh.

The process from 114 source images to polygon mesh

The 114 source images needed some processing even before getting into the compiler, at which point the background in each image had to be masked out to avoid unnecessary data points.

The resulting textured model was simply beautiful, capturing the most subtle carving details and wood grains. Special thanks to the administrative staff of LNHS!